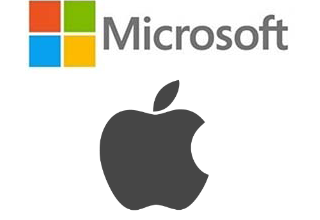 Apple or Microsoft? Here’s our comparison

As an IT specialist, we understand that getting the best hardware and operating system for your business is crucial. There are two major ones we can take a look at today – Microsoft and Apple. Both have advantages and disadvantages which set them apart from each other. To make things as easy as possible, we’ve set about our comparison below between the two.

Microsoft Windows has the biggest market share in computing. This means that it is more likely to be compatible with other programmes and software.

Microsoft have released a version of this for Mac and it looks very similar to the Windows version. This means that well-known software such as Microsoft Office can be on Apple devices. For more unique or specialised programmes, Apple users might have a hard time finding one compatible with an Apple Mac.

What many Apple Mac users can do is install Parallels. This allows the Microsoft Windows operating system to run on their system. Very few business software packages are compatible on an Apple Mac natively.

It’s important to decide which operating system is right for you. It is best to consider what you will be mainly using your computer for and what programmes you would require.

Apple hardware used to arguably be more reliable than Microsoft Windows. This is because the Apple Mac operating system was written specifically hardware components which were optimised to work together and allows everything to run more smoothly. That all changed several years ago when Apple stopped manufacturing their own computer chips. They instead chose to resell Intel which means both Apple Mac and Windows now use common hardware.

Microsoft is more open in this regard allowing Microsoft Windows to be installed on virtually any hardware. As a result of this, you have more flexibility in the type of device you want to use.

Many users choose to have an Apple Mac because it looks nice and sleek. Microsoft manufactures hardware and have a range of products to suit every type of user. For more details see the Microsoft Surface site here or contact SMY IT Services for guidance.

Microsoft has the biggest market share which makes it a target for attackers, rendering their users more vulnerable.

A wide range of malware is available for Microsoft Windows, but Mac users still need Antivirus and Malware protection. Due to increasing popularity, more malware is released for Apple than Windows. As a result of this, both devices are equally as likely to be affected by a security issue.

Compared to Microsoft computers, Apple computers are very expensive.  This is because users tend to compare the spec of £2,000 Apple Macbook Pro with a basic Windows device and expect it to perform on a comparable level.

Nearly all Microsoft Windows based computers will wind up less expensive than buying an Apple computer. That is until you compare it with Microsoft’s Surface range here.

With Apple components being so integrated, it can be a difficult repair job to pinpoint what isn’t working properly. This can therefore mean that Apple repairs can be more costly than Microsoft repairs as Microsoft components are easily accessible.

Depending on what your business does can have a hand in choosing which hardware is best for you.

Creative professionals might lean towards using Apple computers because the Adobe products they work with were originally made for Apple.

Microsoft computers are the larger market share, it can benefit nearly all businesses because there is no limitation on software compatibility or customisation.

SMY IT works with both Microsoft and Apple and is knowledgeable in both systems. Contact us today if you need advice for your business.

Don’t take our word for it, see what are our clients say

It is costly for us to have our systems down and really appreciate the speed that your team respond to any issue we have. I don’t believe we have had any problems which you have not been resolved.